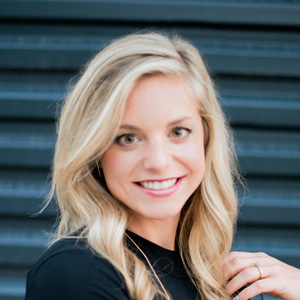 My name is Ashley Connell and I’m the CEO and founder of Prowess Project. We have an integrated platform that takes women from home to hired, particularly caregivers who want to return to work or women who want to pivot in their career. Through our platform they receive training in a community of like-minded women. We gather hundreds of data points on them, their skills, and their expertise, as well as their behavior style, work style, and communication style. That data is used to match them with the best job possible.

I did B2B tech marketing for 15 years. One day, I realized that I had been carrying anxiety about how I was going to continue this career I loved and have children someday. I went on a mission to address this anxiety, and found a Harvard Business Review statistic that if a woman is out of the workforce for just three years raising children, she loses 37% of her total compensation power forever. This happens to 43% of educated experienced women, and potentially even more so for those who are not. Learning that, I dedicated my life to do something about it. I talked to hundreds of women who were in this scenario – they have been trying for years to get back into the workforce and couldn’t. When I asked why, their biggest barrier was confidence. It’s because they didn’t have a path to follow. Returning to the workforce is such a complicated decision for so many reasons. I wanted to help by giving them a path and creating a space where women can go no matter where they are. We’re not just matching them with any jobs – it’s a very intentional, data-driven way so that these women will be in roles with teams that are supportive and really set everyone up for success.

I stand for gender equality in the workforce. That may be in the form of being a working parent, in particular mothers, or all of the mommy penalty bias we see. If you are out of the workforce and have a gap on your resume, you are three times less likely to get an interview than someone who has the same gap for reasons other than caregiving. I also talked to hiring managers because to solve this problem I had to understand what it was about returners that scared them. Emotional intelligence and similar skills are not built into the early stages of the hiring process. If they get 1,000 resumes coming in for a job, they whittle it down to maybe five who get a phone call. As women, we have a natural tendency to have higher emotional intelligence. This huge asset that women have is getting completely ignored unless they’re among those top five people. I wanted to turn hiring on its head and really infuse more emotional intelligence data so that the fit for the candidate and the role can be the best possible.

On the employer side, we’re seeing that the data analytics we’ve done around emotional intelligence is cutting their hiring cost and time in half at a minimum. Those are bottom-line impacts that we can see immediately. In the business world, unless it helps the bottom line, most companies won’t prioritize it. Therefore it’s really critical that we look at the impact on that side so that we have returning employers.

On the talent side, these women and caregivers gain confidence. On average, we’re seeing a 25 point increase on a 100 point scale in how they rate their confidence before Prowess Project to after Prowess Project. We’re also seeing that 70% of the women who go through our upskilling programs secure jobs in three months or less. What I think is so fascinating is that the confidence piece is the main change. These women are extremely capable. Once they’re out of the workforce they don’t lose the experience, the intelligence, or the professional know-how. They gain so many people skills from the time that they were out raising their children. If you combine all of that and brush them up on the latest technology, we’re seeing that this is the recipe for success.

The first person who came to mind was my mom. She is a working mother. Growing up I watched her turn a side hustle into a multi-million dollar company. Just watching her do that was so incredibly impressive. What keeps me going on a day-to-day basis are all of the hidden stories that I get each day from women who either felt completely lost until they found Prowess Project or share success stories when they find their dream job.

I want to see more feminine energy infused into the workforce. If you think about the workplace and workforce, it was built for men by men. I often compare it to a urinal. Women slowly and quite recently have entered the workforce, but we’re playing by rules that were not built for us. If you look at what makes someone rise through the ranks in the workforce, it is often oppression, being competitive, and being loud. All of those are typically masculine traits versus feminine traits which are typically great communication, collaboration, and self-regulation. I think we are going to be better as a whole once we see more balance of that in the workplace.

People don’t like change, especially people who are benefiting from the way things are currently working. That is often something that gets in our way. I also think that people in companies love the idea of hiring for diversity, but when push comes to shove often times they won’t. Men and women are all born with ingrained biases and ingrained gender roles. It doesn’t matter how open you strive to be, they still exist. I think the biggest barrier we’re going to have to overcome is how to chip away at those and change those ideas quickly.

COVID-19 has been a devastating force against working women. Roughly 25.4 million working moms were pushed out of the workforce when they had to decide between their kids or career. That put the workforce back 30 years in terms of progress and the gender pay gap. More attention needs to be focused on this very, very quickly. I’m hoping that Prowess Project can be that landing pad for those women when they do want to return and we can make that huge impact that’s needed.

Working mothers are the best investment you can ever make. Eighty-nine percent of Americans say they prefer to have a manager who is a working parent, specifically a working mom. I think the bias of working mothers is so incredibly backward. There’s all this bias that they won’t work hard when in actuality they have more to lose. They’re not working so they can buy the next pair of jeans, they’re working so that their kids can go to soccer, or so they can put food on the table, or buy their children new clothes. If you’re looking at desired leadership skills, almost all of them are emotional intelligence. If you just look at the data it’s bizarre to me that there are not more female leaders.

There’s a story behind this. We were at a stagnant point in our business and kept saying over and over again, “We’re so close.” Then our COO Leah Steinkirch said, “Actually the fact that we’re saying ‘we’re close and not quite there’ is preventing that success.” We changed the way we think about success. Instead of saying “We’re so close,” we started saying “It’s happening.” That brings success into the present. We’ve seen a drastic change because of that.

First and foremost if you’re hiring, come to Prowess Project. You will not regret hiring a working mother. If you are or know a woman who wants to get back into the workforce, please send her our way. We have a ton of open roles right now that we are looking to fill. The chances are high that they would get hired quickly.

It’s free to join our community and go through our build-a-profile experience that gets you into the job pool. Our training and upskilling usually cost $350 but we’ve developed a scholarship program because a lot of women can’t afford that right now. Finally, you can help by donating however much you’d like to help a woman who desperately needs it go through our program.

At Orapin, we believe those who are working for the greater good should be known, supported, and celebrated. We give do-good businesses the resources and support they need to increase awareness and grow their audience so they can maximize their impact. If you would like to be featured in INSPIRED IMPACT™, reach out to hello@orapinmarketing.com.