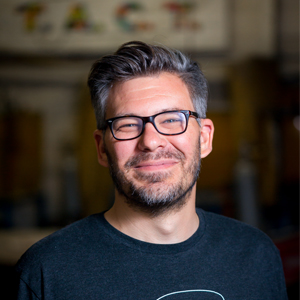 Danny Combs is the Founder/CEO of TACT – Teaching the Autism Community Trades headquartered in Denver. Follow them on Facebook and learn more at buildwithtact.org.

My name is Danny Combs and I am the founder and CEO of a Denver nonprofit called TACT, which stands for Teaching the Autism Community Trades. We are working to train, educate, empower and employ individuals on the autism spectrum. These individuals are the largest unemployed group in the country, with a 90% unemployment rate. We are very proud that TACT is leading the way and transitioning individuals on the spectrum from education and training into employment with an 83.3% success rate.

My family background is in the trades. My great-grandfather and grandfather worked for a company in the aerospace sector. My dad was a general contractor. Growing up I learned about building homes, and naturally, when you’re a fourth generation in the trades, you completely reject it. I wanted to be a musician and pursued a successful music career in Nashville for more than a decade.

My amazing son Dylan was born and we learned the part that made him extra special was called autism. That completely changed my life. I discovered he was really really good at visualizing, conceptualizing, and manufacturing incredible things. I didn’t know at the time if it was autism or if it was my family background so I started looking for a program that could support him in that. We were spending so much money on therapists, who were wonderful people doing great things, but not really building up his strengths. I couldn’t find anybody to support my son in what he loved, so in my mind, I developed an idea for a program. Then I met Dr. Temple Grandin, a renowned expert on autism and livestock, who herself has autism. I told her about my idea, and she said to stop what I was doing and create this program now. It was the push that I needed. I put down my guitar and picked up a hammer so to speak, and we got TACT underway six years ago.

Danny Combs is the Founder/CEO of TACT – Teaching the Autism Community Trades headquartered in Denver. Follow them on Facebook and learn more at buildwithtact.org.

One in 44 kids has autism according to the CDC, although some states don’t assess for it until age eight. In certain states, like California and New Jersey, the number is higher. There are a lot of kids with autism, and 90% of them end up unemployed. The fact that this huge portion of our population is ending up in group homes, day treatment centers, or in their parent’s basements is just not acceptable. They aren’t even given an opportunity to have a career, a future, or independence.

At TACT we’re working really hard day and night to provide opportunities for our kids to have a genuine future of their choice, not one where they’re limited only to certain jobs. In June 2022, subminimum wage finally became illegal for kids with autism in Colorado. It’s bonkers to me that at the beginning of 2022 there was still a law on the books that they could make less than minimum wage. The average TACT graduate makes $19.86 per hour, which is well ahead of the curve. We’re proud that we’re giving kids careers, not just jobs, and understanding there’s a difference between the two.

When we’re getting a kid a job, that’s a pretty big metric of success to give them that future and independence.  We view that as a win. But it’s so much more than that. Oftentimes, when students come to TACT, it’s the first time they’ve been told they’re good at anything. They don’t get opportunities to experience success. Our students will call things they’ve made at TACT their trophies because they feel they’ve won at something. That’s totally a win for all of us, even if it’s not a metric of success.

Obviously, my son is my inspiration, but it’s so much more than that. My favorite part about TACT is not just helping these kids step into their careers. It’s when we are all hanging out at lunch and the kids are laughing, joking, and playing. You see this demographic of kids that’s been historically disenfranchised and told that they’re socially disconnected. Yet they’re working together, laughing together, and playing together. We’ve set up that opportunity for them to be successful and to be themselves. It’s just such a feeling of community. That it’s working becomes a motivation, wanting every kid to have that opportunity to be in an environment where they can feel successful, valued, and part of something. It’s the knowledge that they can take the confidence that comes from that environment and recognize that they can pursue a career because they do have talent and ability. Even though they haven’t gotten that opportunity before, we’re making it together.

The goal is to take it nationally. We want TACT to be everywhere. Sadly, we’re still the only program like this in the country, which breaks my heart. Autism services are funded differently in every state. In Colorado, it’s even funded differently from county to county. It becomes incredibly difficult to fund a nonprofit for autism unless you make it fee-for-service. Raising a child with autism is expensive as it is. The average Coloradan spends $100,000 a year on autism services, so we don’t want to be an organization that is taxing parents with yet another fee. We work very diligently to find opportunities for scholarships, grants, donations, and organizations to make that possible. Funding it in different states is going to be tricky, but we’re working with Easterseals of Colorado to bring TACT everywhere.

The resources available for parents are a huge hurdle. There are tons and tons of resources for children with autism, but once they become a teenager to young adult everything dries up. Parents at that point are often spent, they’ve given everything they have for 18 years.

I recently met with a therapist in New York and she noted that one of the most frustrating things about her job in working with kids with autism is trying to build a future for them, yet at the end of the day 90% of them will end up in a day treatment center or in their parent’s basement. Our society still hasn’t embraced these kids. I hadn’t thought of it from that perspective, yet that’s a very real hurdle that is happening. Collectively as a society, we work in concert to create a future for these kids and still have a 90% failure rate. We need opportunities like TACT that are working, and we need more people to support it rather than work against it. We are grateful for the foundations and businesses that see the benefit.

Different isn’t less. People look at autism and they think “less than.” It’s not less than. The kids that we have here are doing amazing things. Coors just recently hired one of our graduates. In the first couple of days, the graduate noticed something that Coors employees hadn’t noticed in decades of work. They were so impressed that they called us to hire more of our kids. We need more people and businesses like that, who embrace this group. When you tell people there’s a demographic of 90% unemployed, most people are shocked because we don’t talk about it. We look at the national unemployment rates and single digits, and it should hopefully get lower. But when you say nine out of 10 within one demographic are unemployed, that’s completely unacceptable. Why are we not jumping up and down and changing that?

Right now we need resources or materials to support a new space so we can leave an impactful footprint on our community. We recently acquired a new building that’s three times the size of our current space. It will allow us to serve so many more kids with autism, but it’s a stretch for us to renovate it. We always can use people who are willing to hire our kids or help us with transportation. Reach out to us via BuildWithTact.org to learn more. We’re leading the state of Colorado in getting jobs for kids with autism and are ready to serve so many more.