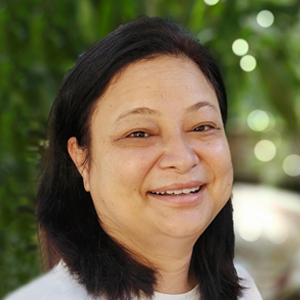 My name is Geeta Dangol Maharjan from Kirtipur, Kathmandu, Nepal. I am the Founder & Director of Orange Butterflies (Women Empowerment Centre), an organization that began in 2017 to empower women through financial stability. We envision a country where women are seen as able as men. To achieve gender diversity, we sensitize the community and give access to skills and opportunities to become self-sustainable in different fields.

Nepal is a strictly patriarchal country in which daughters are valued less. My father wanted my mother to give birth to a son. Although she had always wanted a small family with only two children, my father insisted on trying until the first son was born. Thus, she was blessed with seven daughters, and I am one of them.

Listening to my mother’s stories and observing my parents’ relationship, I feel sad about her being ill-treated and marginalized by her entire family. As a child, I often watched incidents of violent attacks and I felt helpless. Once, my father threw an entire bowl of hot food at my mother, just because the vegetable was not salty enough. There was a silence that built up between my parents due to financial dependency.

I never felt that my father was there for us during my childhood. He never took responsibility for paying fees or visiting teachers. My mother used to send money to us to pay the fees ourselves. We were terrified of him. Yes, I could see he was working hard. But due to his violent character, we never had that father-daughter relationship, even when he became calm later in life.

One fine day, my mother’s sister-in-law suggested a business idea to my mother and she advised her to move out. Finally, after four children, my mother spoke up and got us separated from the joint family. She had no education. However, she empowered herself to start a small retail business in a new locality. Slowly but steadily, the business took off. I could feel and see a change in the relationship between my parents.

Suddenly, there were bombs everywhere; Nepal was not safe anymore. The Nepalese civil war (1996-2006) started due to political conflicts. I was born in Kirtipur (City of Glory), an ancient city of Kathmandu Valley located in the southeast region, which used to be the safest place before the civil war. My parents sent my sisters and me to India for further studies. People across Nepal were moving to the capital city for safety.

I came back to my own country in 2017, only to learn that the issue had worsened and almost 500,000 people were moving out of the country every year to foreign lands for low-paying jobs due to a lack of skill and education. Many women were left behind with household responsibilities, without any secure source of income.

This made me wonder: Why can’t we create jobs within our country? I have witnessed how my mother’s life changed after she secured her financial independence. She could decide everything for her children and family. She even became bold and taught us to become bold. I pondered over my mother’s story and could see that many women still faced the same issue: silence born of financial dependence.

Since 2017, I have been working with marginalized women to help them achieve financial independence. I could see the impact from my own story after securing a job and fending for myself, doing way better than the male cousins in our family. My father concluded that I was as able as a boy. He slowly stopped being violent. Today, I am running my own business and a non-profit organization for women in our community. Furthermore, I am taking care of my parents as the Woman of the House.

Now my dad is the proud father of seven daughters who are no less than any men in our community. He is now supporting the cause I am working for.

We stand for gender equality (SDG Goal 5), good health and well-being of women and children (SDG Goal 3). We provide access to decent work through skill development training and socioeconomic growth for women (SGD Goal 8). We are building a model of Analog Forest in Nepal to promote it, save the environment, and generate income through the forest for local and marginalized women (SDG Goal 13). To achieve all this, we believe that collaboration with the local community, local government, and other stakeholders is the most important part of the work we do (SDG Goal 17).

We are encouraging women to have a higher level of confidence within themselves through capacity-building training. This has brought a huge change in a large group of women in the community. Earlier so many women were shy to express their thoughts and feelings and even tell their names. Now many have become voices for their community. We are able to provide employment for more than 50 women in these five years of journey in Kirtipur. We provide different types of skill development training in our center.

I am inspired by the success of women and girls to whom I provide training and support.

I would like to create an industry for the production of eco-friendly and sustainable products which are used in our daily life. Also, I would like to set up a physiotherapy center for elderly citizens and a daycare centre for the kids of the women who work with us and who would like to pursue their careers.

We are still facing challenges to bring women out of their houses. Due to a strict patriarchal society, it is still believed that women need to look after the house and do household chores and look after their family and kids. There are many more women who are more capable of taking up jobs in different positions, but just because of this social system and norms they are unable to come out of their houses.

We believe that women should be treated and respected equally in every aspect of society. Opportunities should be open for all, without any gender discrimination.

“If you think we can’t change the world, it just means you’re not one of those who will.” — Jacque Fresco

We are seeking support and encouragement to take this initiative further via any kind of contribution. It can be sharing our work, volunteering, or small in-kind donations for office equipment so that we can run the organization. Also, if interested, one can be a part of our projects such as Building an Analog Forest, building a Centre for skill development training, skill development projects, and creating a daycare centre.