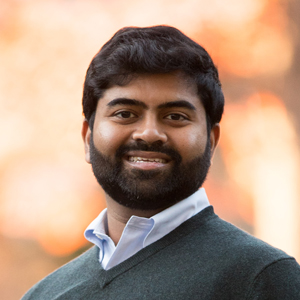 ​My name is Sid Pailla and I’m the founder and CEO of Sunny Day Fund. Our organization is on a mission to enable financial well-being for all hard-working Americans. We define financial well-being as a combination of the stability and freedom we all need in order to survive and thrive in life. We firmly believe that it starts with having enough savings on hand to overcome any kind of emergency as well as realize those immediate goals in life.

My parents and I came from Hyderabad, India, with negative assets and initially a lot of debt. We faced some financial volatility that required us to take money from our savings and get out of our 401k when the market was low. It was my first realization that money in America was pretty complicated. I spent the next two decades becoming effectively a personal finance expert, helping my own family as well as friends and others. That really collided with my academic background, learning the theory of building inclusive technology. Driven by behavioral economic systems, I just started diving in deeper, recognizing that many have a 401k, but not emergency savings. It was something employers could easily help with. I learned that I wasn’t alone in my own personal financial journey, and I felt I had a unique skill set to do something about this scaled-up problem. If not me, who? A lot of research, product development, and clients later, here we are with Sunny Day Fund.

If we succeed in our mission, a younger version of myself and my family would not have had the same type of financial volatility that impacted us so negatively. I think a lot of the systems today really continue to help those who already have those resources, in terms of how people get paid and the different benefits they can access. On a day-to-day basis, I’m standing for folks who have had fewer resources historically, like immigrants, women, and Black and Hispanic Americans. I think that if we are to succeed, we will not just help create market dynamics, but also create a regulatory environment to raise the floor on what it means to provide employment. I think that it shouldn’t just be about income, it should be about a level of livable wealth.

There’s a statistic of the number of Americans who don’t have access to $400 in emergency savings. The number fluctuates between 40% to 47%, and up to 55% depending on the time the survey is conducted. What we are fundamentally doing is reducing the percentage of people who are unable to handle an unexpected $400 expense, and we’re also creating a pathway for those individuals to achieve other immediate financial goals. We’re helping them work toward a $2,000 savings balance in the Sunny Day Fund while putting down a security deposit, a down payment on a car or home, or achieving similar financial goals. These are all things that happen in life well ahead of retirement. As a result of us doing that, we’re helping people achieve financial stability and financial freedom, which is how we think about financial well-being.

I think in this world of impact, there’s only so much that a personal experience will help. At the start, founders can pull a lot of motivation from their own personal stories when they’re trying to get off the ground, even if it’s not immediately financially worthwhile. At the end of the day, we’re creating a difference. After we’ve had that initial impact, when the organization starts to grow, it’s more about other people finding joy or believing in what we’re doing. I feel like we’re there now. We know we’re creating a difference for people who are relying on the Sunny Day Fund when things go wrong. People are believing in what we’re doing and why we’re doing it. What’s inspiring me to do this on a day-to-day basis is no longer my own story but the stories of others on our platform today. It has become bigger than myself.

Today, there are about 152 million hard-working Americans. If you look at the number of people who have access to retirement savings, it still represents roughly half of them. I believe it’s possible in this decade for all 152 million Americans to access retirement savings and (more critically for us at Sunny Day Fund) also have access to emergency savings. I think that we will automate a lot of what it means to build wealth and access wealth. Those aspects of life will not prohibit us from living life. I feel that we can really tackle poverty through this. I’ve been talking about emergency savings from a U.S. perspective, but having been born and raised in India there’s a massive part of me that wants us to scale this internationally because this is truly a worldwide issue. We already have aspirations to expand what we’re doing across India, the United Kingdom, South Africa, and other places that essentially have the same retirement savings construct. M big dream is to bring Sunny Day Fund to wherever the sun shines.

Just as with any kind of innovation I think that the biggest challenge always is inertia. When you think about the people who remain in charge of offering employee benefits and retirement savings, what we’re doing is still a new concept. Even if the data shows that 30% of those people are taking loans and hardship withdrawals because they don’t have emergency savings, there’s this us-against-them type of attitude that remains. That inertia of only staying focused on how things have been done before is powerful and remains a challenge.

But for every one of those challenges, we continue to be very pleasantly surprised by the innovators in the space. For example, we talked with an employer of 4,000 people who said, “If we’re not an early adopter, we’re not living and not serving our people.” While inertia remains a challenge, the opportunity to partner with these early adopters and have them define the future is the opportunity to create a brand for ourselves. Not only does it show that we create an impact, but it helps our partners distinguish themselves as innovators.

That it works. I think that often there’s a leap of faith that it’s going to attract and retain people and increase productivity. Sometimes I have to remind employers that their employees work for them for money. That’s where we’re starting when we talk about what we’re doing. What we’re doing and the method of automation is not a novel concept, it’s just that we’re doing it in a simpler way than what has been done before. Our data proves that it works. Others who have been studying us are starting to realize it’s proven as well, and our employees have been super happy with it.

A second quote is actually the John Donne poem, “For Whom the Bell Tolls.” That to me is inspirational because it’s this concept that we’re all in this together. We all hurt for each other, but also can thrive with each other.

If you’re an employer, or you work at a company, reach out to us at SunnyDayFund.com. It’s very easy. We’re basically creating a path for you to be a happier, wealthier employee. It’s a pretty simple reason why you should reach out to us. If you’re an impact investor, I would love to tell you how we’re measuring our success, how other impact investors have invested, and why they’ve invested in us. A final call to action is about being a democratic citizen of the United States of America. Secure Act 2.0 is going through Congress right now and would make it easy for employees to save for emergencies through their employers. Write to your congressperson or your senator and tell them that you support it.